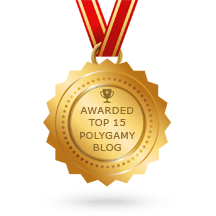 I began writing this blog in 2010 as a way of expressing my thoughts about polygamy and growing up in a cult. As I came to my own understanding and awareness of the difference between religion and spirituality, it gave me the ability to look at my childhood through an expanded view. This is what I hope to share with you.

I was born in a secluded polygamy-based cult in Montana. Yes, polygamy does exist outside of Utah.

In this secluded community our unique brand of religion was the stronghold in my life. As a little girl I was taught to believe that my worth was determined by my servitude to men and their version of God. The sole purpose for my existence was to belong to the right man and give him as many children as my body would allow. The belief that I could not survive without a man to take care of me, control me and make my choices for me was fed to me from the time I was very small.

As I grew I was indoctrinated with the belief that I could not obtain heaven unless I gave my husband at least three wives, and only then, if he determined that I was worthy of heaven. I was taught that I was not of value, did not need an education, did not need to drive, and must do everything I was told by the male members of the society, because they were representatives of God. Then I needed to top it off with a smile on my face in the belief that suffering was good for me, that suffering in silence made women beautiful in the eyes of God and men.

From the time I was very young, I knew I did not want the life God had supposedly predestined for me.

After tolerating years of sexual, physical, emotional and spiritual abuse at the hands of the men I had been taught were servants of God, I found myself having to choose between suicide or escape. At the age of seventeen, I found the courage, driven by desperation, to leave everything I knew behind me. Rather than living a life that felt like hell, I chose to face the outside world, a world I knew little about and had been taught all of my life to fear.

I found myself having to choose which version of hell I wanted to suffer through.

In the outside world I found the love, acceptance and happiness I had never felt in the community of my childhood. Through my own therapy, I healed myself from the trauma of my past and created a life that I had only imagined as a child. I discovered that hell is nothing more than an illusion in the mind and that heaven is an inside job. With the assistance of my loving inner therapist, I came to understand that any feelings of worthlessness and unworthiness are misconceptions based in the delusions of fear. Fear is so sneaky and deceptive, it often disguises itself as love.

Freedom from the constant bombardment of fear became the driving force in my life.

It has become my life purpose to teach others how to RISE ABOVE FEAR-BASED BELIEFS and have the courage to trust their own path.  The focus of my work is spiritual freedom.  Freedom stems from understanding there there is no one-right-way and that all paths lead home to love.

As an author, speaker and spiritual luminary, I teach others how to see their past with new eyes and create a future that fulfills them in every way. I teach my audiences and students how to rethink what they think they believe, and live in their own inner truth.

I am also a human rights advocate. It is my firm belief that human rights are synonymous with spiritual freedom, and our God given birthright. I believe that all people deserve to be treated with dignity, equality and respect and that in the mind of the infinite energy many call God, we are all of equal value. Anything less is a man-made delusion.

Hop on over to my official website and pickup a free copy of my free guidebook and see what I am up to in the real world.

To learn more about my message, programs, books and services, visit http://victoriareynolds.com/

Error: Twitter did not respond. Please wait a few minutes and refresh this page.