Sam Brower is the author of the eye-opening book Prophet’s Prey, which has become a documentary film scheduled to air on Lifetime Television later this year.

As a private investigator, Sam Brower was an integral part of bringing Warren Jeffs to justice. I am proud to call him my friend and I applaud all of the work he has done over the years to bring the F.L.D.S. to its knees and tell the truth of what is happening behind the veil of deception behind this particular religion. If anyone knows the truth about Willie Jessop and his interview with Oprah, I believe Sam would. 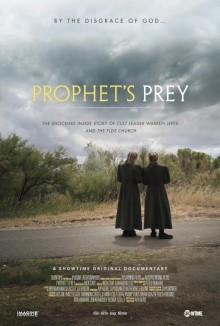 “I am more than a little disillusioned by Oprah. She knew better and knows better. So did her associate Lisa Ling, who was also told by Carolyn Jessop and myself back in 2009, what kind of person Willie is as well as Seth Jeffs; both of whom were given a forum despite their participation, aiding and abetting in some of the most egregious crimes against children in the history of this country. The only person who had access to the records Willie speaks of with Oprah was Wisan, who was able to subpoena them on the condition that they not be released to anyone.

Those records were incomplete and only contained a portion of the recording of the rape of Merrianne, which Warren carried around like a trophy as he traveled.

None of the now infamous sex tapes were released until Warren went to trial. I worked with prosecutors in the Texas AGs office and that material was locked in an evidence vault, and was massive enough to fill a semi trailer. Willie was not given access to that evidence. If he had been, anyone granting that access would be guilty of felony obstruction, and violating a court order. Willie is not a lawyer or Private Investigator, and despite his illusions of grandeur, he would never be given access to that material in a million years.

Willie was kicked out of the FLDS by Warren, through Lyle, because they were sick of him and he was always considered expendable. In Warren’s own words “…Willie Jessop is a wanna-be”. He was expendable and was someone who was as a tool in order to carry out Warren’s nefarious purposes. When Warren made it to a Texas jail that had unlimited access to a pay phone, he came to the conclusion that Willie’s new found popularity with the media as defender of Warren Jeffs and the faith had become a liability, and ordered Lyle to get rid of him. Willie’s usefulness had come to an end with the Jeffs, and it had nothing to do with Willie’s “…dramatic change of heart.”

Oprah’s producers knew what kind of person Willie is because they called me several times to ask. They had deep reservations about putting Willie on the air but in the end, I believe the hope of increased ratings overrode their ethical responsibility to avoid giving a forum to an accomplice of Warren’s Jeffs.

It doesn’t matter if you’re the person who committed the rape or the person who held the victim down or the person or set it up or the person who covered it up; all those involved are equally culpable from an ethical and legal standpoint. It’s not just the fact that Willie was one of the chief enablers for Warren and his hierarchy. I am sure Warren would have found someone else to fill his shoes, just as he did once he got rid of Willie. It’s the fact that Willie has no sense of conscience and is willing to lie and deceive incessantly in a narcissistic attempt to portray himself as a hero. It is a slap in the face to those victims whose lives he has, without conscience, impacted, and all the decent men, women, and children who have chosen to take the high road and do the right thing despite great pressure from people like Willie and other FLDS leaders who made their lives miserable for it.

It is my opinion that Willie Jessop is a vile, despicable human being but likewise it is my also my experience, after many years dealing with those who would harm others in the criminal justice system, that every dog has his day. And I am certain that rule applies to Willie just as well.”

I am so grateful to Sam for his tenacity and for his willingness to keep fighting the fight for those who have no voice. I find it sad that Oprah and her team gave in to the ratings game and created a space to make Willie look like a hero. He is no hero, regardless of how much his ego may want to believe he is, and how much he tries to sell it to the American people. Perhaps the only recourse those whom he hurt will ever have, is to get him where it hurts him most, in his pocketbook. Since Willie is so good at the lawsuit game, maybe the tables will be turned with a class-action against him. Perhaps that is the only way he will truly pay his debt to society and pay penance for his choices.

May those who suffered at Willie’s hands finally find the peace they rightfully deserve.

Error: Twitter did not respond. Please wait a few minutes and refresh this page.